The Emerald Crab is most commonly known for its use in the Marine Aquarium to consume bubble algae and other types of nuisance algae.

The appearance of the Emerald Crab is a characteristic flat shiny Emerald Green shell and hairy legs, the Emerald Crab also has cupped claws that allow it to easily pull algae from rocks and other surfaces. This is a small species of crab normally getting no more than an inch and a half in length.

The Emerald Crab is native to the Caribbean, Gulf of Mexico and Atlantic. They are a peaceful tank mate that will not be a bother to most other inhabitants but has been known to eat certain types of coral as will most scavengers. Keeping Emerald Crabs with aggressive or predatory fish may keep them in hiding so they will never come out to graze at all.

The Emerald Crab is nocturnal usually spending most of its day hiding under rocks or in crevices and coming out after dark to scavenge on algae, uneaten food. This crab is often used for the control of Bubble Algae and while Emerald Crabs are useful for this application do not expect 100% removal.

The Emerald Crab probably can be bred in captivity do to the easily ability to be sexed however due to a free swimming larval stage this makes doing it at any scale very difficult and I was unable to find any Captive Bred Emerald Crabs for sale at this time. 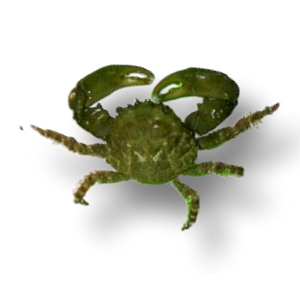